The cleaning world is renowned for a high turnover of staff but at ServiceMaster Clean, Swansea & South West Wales we pride ourselves on our high staff retention rates.

October 2016 we brought you news that one of our contracts managers – Sharon Rosier celebrated Ten year of continued service to ourselves, and this month saw us celebrate not only another customer ten year anniversary but also just as importantly, a ten year work anniversary for one of our cleaning operatives – Angela Arcopinto.

Angela has worked for ServiceMaster Clean, Swansea since June 2007 and has been a fantastic employee and representative of our company ever since. Angela has worked on numerous commercial sites throughout the Port Talbot & Baglan areas for us since 2007 including offices, factories and warehouses and she has always proven to be conscientious and always has the ‘can do’ attitude. 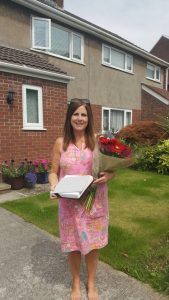 Jayne our Managing Director stated “I would like to personally thank Angela for her hard work and dedication throughout the last ten years and thank her for her loyalty shown towards my company, I am looking forward to working with Angela over the next ten years.”