October 28th 2016 marks ten years of service for Sharon Rosier, Sharon started with the company as a part-time cleaning operative within a commercial contract in the Llandarcy area in 2006.

Quickly Jayne our Managing Director spotted great potential within Sharon as she was and still is very passionate about her job and also very keen to learn and develop. Jayne asked Sharon to conduct a couple of hours worth of supervision per week on various sites across the local area and it became apparent that Sharon was building up a great rapport with clients and staff members and eventually when a full time contracts managers role became available within the company due to growth, that Sharon was the right person to fulfil this role.

Since taking on the role as contracts manager, Sharon has attended a number of management training courses and health and safety courses and still to this day strives to learn new aspects within the role. Sharon has a great rapport with clients and staff and has been fundamental within the growth of the company.

Jayne our Managing Director added “It has been fantastic working alongside Sharon over the last decade. My company has only been established for 11 and a half years and ten of which has been spent with Sharon. Her loyalty and hard-working nature has helped me develop my company into what it is today and for that I am extremely grateful. Sharon has developed within herself and is much more confident both professionally and socially since we met ten years ago and it is my pleasure not only to class her as one of my contracts manager but also a very dear friend. I am looking forward to the next ten years of working alongside each other. Thank You Sharon.

Sharon added “Its been a fantastic ten years and I wouldn’t have progressed and be where I am now without Jayne helping me develop from an early stage. It is a privilege to work alongside Jayne and for the ServiceMaster team and its true what they say; Time does fly when your having fun!!”

From all at ServiceMaster Clean, Swansea & South West Wales we would like to thank Sharon for the hard work, commitment and dedication she has shown towards the development of the company over the last ten years and continues to do so to this day. We are looking forward to the next ten years. Thank You. 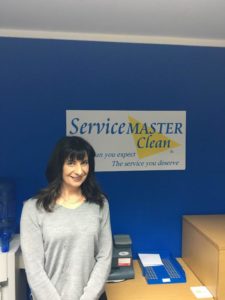 Friendly and co-operative staff, any issues are sorted out immediately and excellent standard of work