As you have probably noticed in our previous news articles we recently celebrated our tenth anniversary in April 2015. Since April we have celebrated ten years of continued cleaning services for three doctor surgeries.

This week we have celebrated another milestone which has seen us providing continued office cleaning services to Wernick Buildings in Kenfig, Bridgend. Wernick was originally located in Neath Abbey, however re-located last year to larger premises in Kenfig Industrial Estate, Bridgend.

We have developed a great working relationship with Jeff (Factory Manager for Wernick) and all his team. The picture below shows Jayne and Jeff whilst she visited to present himself with some gifts to say thank you for his continued loyalty over the last ten years.

Jayne our Managing Directed said “I remember the day when we were first awarded the contract with Wernick after a meeting with Jeff and its great too see both businesses have grown together. We place the customer retention and satisfaction with the upmost priority and I am glad Jeff and his team are extremely satisfied with services we provide”

Jeff added “Here is to the next ten years!” 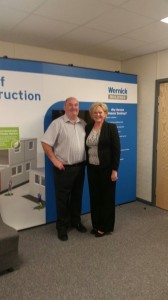